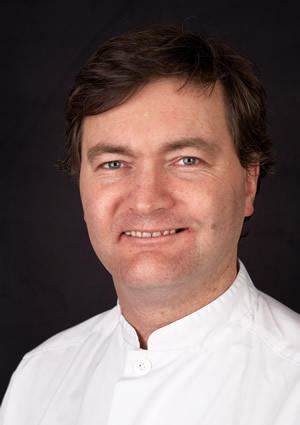 I spent my early years in Uganda before going off to boarding school in England. At Giggleswick School I discovered a passion for rugby and fly-fishing and left with ambitions of becoming a professional fishing guide. But for a fortuitous meeting with a brilliant Osteopath in Oxford, David Ruddick, who helped me overcome a severe neck injury my osteopathic career might never have even started. I was amazed at how he was able to get rid of my neck pain, the headaches and sinus problems that had plagued me for years and it was David who inspired me to become an Osteopath.

I trained at the European School of Osteopathy (ESO) and was taught by some of the World’s leading Osteopaths including Professor Blagrave, Gez Lamb, Tom Dummer, Susan Turner and especially Peter Armitage. The training was incredibly intensive but it was fascinating. A whole system of medicine evolved before my eyes and I quickly realized that Osteopathy wasn’t simply just another physical therapy for low back pain. I soon discovered that the skills I was learning were equally applicable to a newborn baby, a developing child, a pregnant mum, as they would be to an elite athlete or for my Grandma’s frozen shoulder.

In my final year of university I found that I had a particular talent for treating babies and young children and I was encouraged to develop my paediatric skills. My patient list soon became full with babies, children and their families.

After graduating in 1993 I went back home to Yorkshire and became an associate to Mark Wilcox in Wakefield. Here I was able to develop as an osteopath. The babies stilI played a huge part of my life and I started volunteering at the Osteopathic Centre for Children (OCC) in London under the guidance of Stuart Korth, spending many happy hours further refining my paediatric and cranial osteopathy skills. I continued to attend advanced training courses and was lucky to be taught by many brilliant practitioners, especially Dr John Pichler, Dr Alena Kobesova and Professor Pavel Kolar of the Prague School of Manual Medicine and Rehabilitation.

In 1995 I was ready to “go it alone” and opened my own practice in York. In the years that followed I developed a family osteopathic practice that gained the respect of the local medical community, with Health Visitors and Midwives being particularly supportive of my work with babies and pregnant mums.

In 2009 I was granted Hospital Consulting Privaleges as a Consultant Osteopath at the York Nuffield Hospital. Unfortunately an equivalent NHS post never materialised.

Despite all the education and experience nothing has taught me more than my own 4 children and my own experience as a parent has given me a greater understanding of how I can best help your child.

Having taken and passed the Australian Osteopathic Board exams in 2007 I made the decision to move my family to a new life in Queensland, Australia. I am now practicing from the Buderim Osteopath at 30 King Street in Buderim on the Sunshine Coast of Queensland.

In 2013 I was asked to become a clinic tutor at Southern Cross University Osteopathy School supervising final year osteopathic students.

I firmly believe that Osteopathy has enormous potential to help babies and Mums through the trials of pregnancy and beyond and I just want to help as many as I can.

A very important part of my week is treating adults with acute spinal and joint pain.  Having worked in a my own busy practice in Yorkshire where you’ve got to be good to survive!

When I am not working I am a family man with 4 children. I still retain my passion for Rugby Union, although it is now as an expert “armchair critic”, and my fly fishing exploits have taken me as far as the Outer Hebrides, the Seychelles, Egypt, Namibia and Venezuela. There are many fishing destinations on my list but ranking at the top has got to be the Barrier Reef or the Ningaloo Lagoon.